When we first saw the guests, we were kind of nervous because it was the first time that we host someone (at least for most of us).
When the German guys came at 15:30 we were all waiting for them, hyped and looking to their faces, trying to recognize our guests.
After 5 minutes, we were all with our guests and ready to go home and show them our life. 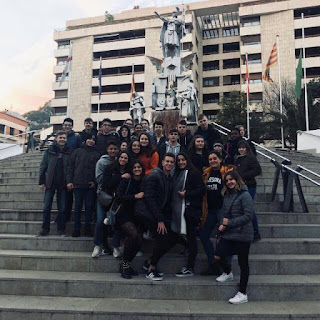 When we got home it was a strange situation because everything was new for them and they were really “scared’’. Also some of us were nervous, especially those hosting for the first time.

We had to ask them and offer them everything since they didn’t want to talk quite much due to the strange and new situation that we were all involved in.

After around half an hour everything was ready. Most of us (hosts and guests) were playing Fortnite althouhg our guests were REALLY tired. We had a lot of fun, as we are all so good at playing videogames. At 18:30, we met in “milsabores’’ (a candy shop)  to have a walk and show them our town, since they didn’t know much about it. We were walking almost for an hour, going to lots of places in town, until we got into a spanish “local” (a kind of club), where we spent some time having fun and listening to music.

After all of that, we had another walk to the church, for no reason, we just wanted to show them the town. We spent some time there, and when we got tired, we went to our houses, as we had to go to the school the next day (obviously!). Once there we had dinner and went to bed, where we instantly fell asleep.

After lunch we were still working .
In the afternoon we met and we were supposed to go bowling but there’s no bowling alley in Alcoy, so we decided to visit the mall where we had dinner.

In Alcoy, we spent almost three hours walking throught the mall, doing things that we like and this kind of stuff, as we didn’t have anything better to do. We went to have dinner because we were so hungry. Some people decided to eat in Burger King because it’s cheaper. Others thought quality is much better than price, and also there wasn’t a big difference between the prices of Burger King and The Good Burger, and some others decided to try Cien Montaditos, a spanish restaurant. 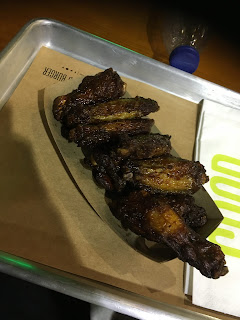 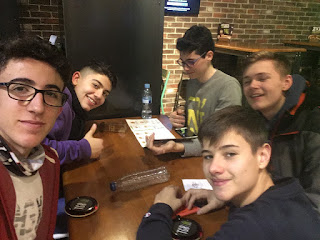 Afterwards, we met in the mall’s entrance at 20:30 to go to the bus station. The bus station was far away so we had to hurry to catch the bus. When we got home, we were much more tired than we were the day before, so we had a shower, we went to our beds and fell asleep (not everyone, others thought that watching TV was more productive than sleeping).

Today (Tuesday) we woke up, had our breakfast and our stuff done. After that we came to school, talked to each other, had fun for some time and then started doing this blog, as this is the task we have to do today.